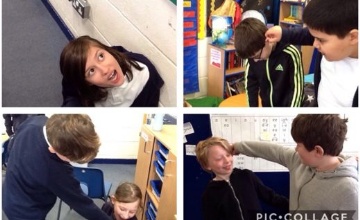 As we approach the end of term, Year 5 have enjoyed another week of wonder.

English – This week, Year 5 have been discussing a variety of moral dilemmas that Roger has had to confront in our text, ‘I was a Rat!’. Playing the role of the Roger’s conscience, children debated, wrote letters and even created art work to illustrate the conundrum Roger faced. Next week, we will be exploring bias within journalism looking at different newspapers to see slightly different slants on the same story. We will then be creating some biased newspaper reports (either broadsheet or tabloid) about Roger’s journey so far.

Maths- reflection and symmetry were the words on everyone’s lips this week in Maths. Mirror out, we set out to reflect a variety of different shapes along varying lines of symmetry. Putting our ever-expanding knowledge to the test, we began to reflect shapes using their coordinates, a vital step towards our final goal of the week - translating a shape from one position to the next. Next week, we will be diving into all things angles. Acute, obtuse, reflex – you name it, we have an angle to meet your needs. We’ll be measuring and drawing angles before identifying missing angles using sum facts.

Topic- In our afternoon sessions, we have been experimenting with the magnetic properties of different materials. After testing a variety of different materials to identify which had magnetic properties, children then had to use only a magnet to complete a complicated to maze and retrieve metal goodies for Roger (the rat) to snack on! Later in the week, we experimented with magnetising different materials and even creating our very own compasses. Finally, we had to choose from a variety of different instruments/tools to retrieve delicious snacks which had been lost, buried and sank. Next week in Topic, we will be designing and building our very own device which will enable Roger to retrieve hidden treasures (snacks) buried around the school!

Important reminder: children are invited to bring an Easter bonnet to school on the last day of term (Thursday 1st April). Don’t miss the chance to parade around the classroom in your best bonnet! To add to the excitement (if children wearing bonnets wasn’t exciting enough!), prizes will be awarded for most creative efforts. There will also be a magnificent Easter egg hunt for all on the same day (1st April). Please note – this is optional. No bonnets need be worn or poor eggs need be hunted if you so desire.