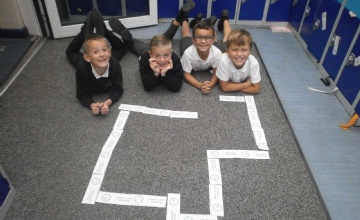 We have reached the end of term 1 and it's hard to believe the children have been in Year 3 for 7 weeks already. They have had an incredible term where they have all worked extremely hard so we would like to wish them a restful and fun half term break.

In English this week we have been learning about an Ancient Greek myth called The Story of Athena and Medusa. We have focussed on character descriptions this week and have learnt how to describe both appearance and personality. In this myth, Medusa, a very vain and foolish girl, is turned into a hideous monster with hair of snakes, so she made a fantastic character for us to describe! We enjoyed thinking of verbs and adjectives to describe the snake hair such as hissing, writhing, slithering, rattling and revolting, vicious, scaly, smooth. We have also focussed a lot on how we should start sentences when describing characters so that we didn't keep starting with she/her/Medusa. We used some fantastic sentence openers such as;

All over her body, Medusa has...

In maths this week the children have learnt to apply their skills in the 4 operations ( +, -, x, ÷ ) to solve word problems. They remembered how to use the bus stop method brilliantly for the division problems but found the grid method for multiplication a little trickier so we spent more time practising this.

In topic we have been thinking about the effect that humans can have on the environment, learning about how island hopping has impacted on some islands in Thailand. The children were able to show opposing viewpoints for this problem.

Monday 28th October is a staff development day so we will look forward to seeing the children back after half term on Tuesday 29th October.

Open class sessions where you can see your children's amazing work and Parent Teacher consultations will be held in term 2 (dates and information to follow soon).