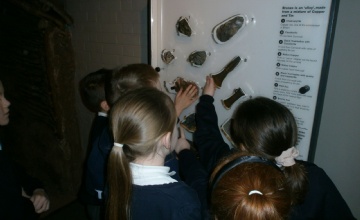 This week in English we have read Stone Age Boy by Satoshi Kitomura. This is a wonderful book that links in very well with our Scavengers and Settlers topic this term. We have been focusing on using speech in a story. We began by revising the punctuation that should be used in a speech sentence eg: "Hi, I am Om," said the stone age girl. We then made sure that we were using interesting speech verbs instead of said eg: bellowed, stammered, yelled. We finished off the week by trying to add adverbs to the end of our speech sentences eg: "Wow! Look at those paintings!" cried Thomas excitedly.

In maths we have been learning about perimeter and angles. The children have learnt that the perimeter of a shape is the total of all the sides. They have used the column method to add the measurements of the separate sides to arrive at the total perimeter. We then moved on to learn about angles. An angle is an amount of turn measured in degrees. We were able to identify a right angle and that angles that are larger than a right angle are called obtuse and angles that are smaller than a right angle are called acute.

This week we have begun our Scavengers and Settlers topic. Our entry point to this topic was to visit Dover Museum. The museum holds a Bronze age boat and the children were interested to hear all about it. We have looked at our early ancestors using secondary sources to find out information about Lucy, a 2.3 million year old skeleton. The children identified differences and similarities between themselves and Lucy. We have also found out about how fossils are created.

Homework this week is to prepare a 2 minute speech around the title: A world in Crisis- Climate Change.

It is up to you how you interpret this title.

This a Viking Academy Trust competition and written presentations must be given to Miss Barrow by Monday 27th Jan so that winners can be announced that week. The children have a week to prepare before that VAT final during the last week of term.

Below is the Term 3 maths challenge. If you would like to enter, solve the problem below and return any entries to Miss Lane’s Classroom (Year 6, Team Indigo) by Monday 10th February 2019. Names of those who are successful in the completion of the maths challenge will be entered into a raffle for a prize where one winner will be chosen in our Chilton Heroes assembly on Friday 14th February. All entrants will receive a certificate for participating.